This island was named in honor of Queen Isabela. Shaped like a sea horse, it is the largest island of the chain. Located to the far west of the archipelago Isabela was formed by the merging of 6 volcanoes, 5 of which are still active. Isabela is the only Galapagos Island to straddle the equator and it’s well known for its untouched and rugged beauty.

Tagus Cove, which was a favorite early pirate and whaler anchorage, from where a high point can be reached for an impressive view of the cove and the lave flowing out the Darwin volcano. Around this spot you’ll be able to experience an incomparable wildlife observation of two of earth’s rarest animals, the endemic flightless cormorant and the tiny Galapagos penguin. 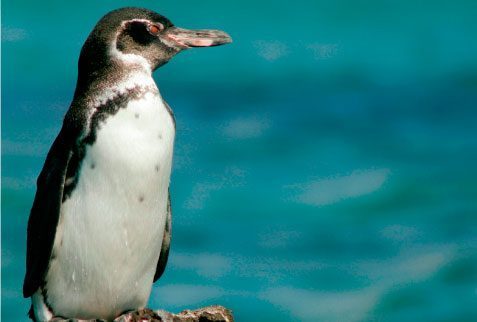 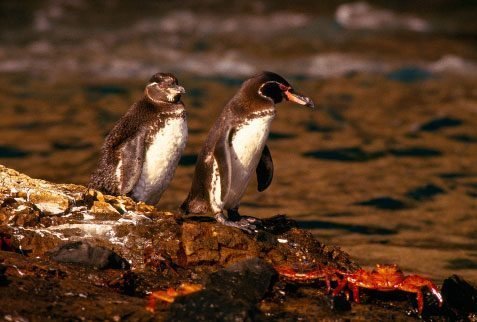 The islet Las Tintoreras has a small bay of completely calm turquoise waters and there you can observe hundreds of marine iguanas, sea turtles, sea lions, rays and even white tip sharks.

Humedales, Wetlands, is a place where you can see series of lagoons, mangrove species, flamingos and numerous migratory birds.

In The Breeding Center, you can observe tortoises of different ages and sizes and learn about their reproduction. Punta Vicente Roca is a place inhabited by plenty of sea lions, marine iguanas, blue footed, masked boobies and flightless cormorants. Urbina Bay it’s a great location to observe a coral area, land iguanas, flightless cormorants and giant tortoises.

Tagus Cove:
Tagus Cove was a historically used as an anchoring site for pirates and whales. The trail will show the dry vegetation zone, the volcanic landscapes of Darwin volcano and Darwin Lake. At the top of the trail you will enjoy an incredible view of the whole area.

Puerto Villamil:
The Villamil lagoons are located near the small village of Puerto Villamil. Flamingos, the black necked stilt and several species of migratory birds can be seen here.

The new Breeding and Rearing center of the Galapagos National Park functions here with the same methodology that has being so successful in Santa Cruz.

Elizabeth Bay:
This bay is the farthest point a Galapagos cruise will visit. After a dinghy ride around two islets called “The Marielas” where penguins, flightless cormorants, herons and blue footed boobies can be seen, it is possible to go into a shelter cove, a marvelous mangrove ecosystem that is a refuge for sea turtles and rays.

Urbina Bay:
This bay was elevated form sea lever in the 1950s during the eruption of Alcedo volcano. A part of the shoreline was raised more than 4 meters and now the visitor can walk on what was once the sea floor, and see the dried corals. In the midst of this bizarre setting were the sea became land, massive marine iguanas wonder around along with drowsy flightless cormorants and in the wet season giant tortoises.

Sierra Negra Volcano:
Sierra Negra volcano is located on the southern part of Isabela Island, between Cerro Azul and Alcedo volcano. It has the second largest caldera in the world after Ngorongoro in Africa. Walking along the edge of the caldera to the north, a place called Volcan Chico can be reached.